Too often we talk about the future of housing for older people (or “later living”) as a far-off, futuristic vision. Something for our parents, or maybe even our grandparents. But we’re forgetting one thing: we are all getting older, and the immediate need has to be considered in relation to our own futures as older people.

Let us flip the question, from what is the future of housing for older people, to what should we create today that will serve the present and the future? We asked Dominic Hailey from ColladoCollins his thoughts on that million-dollar question.

“Ultimately, we are getting to a point where today’s older generation, the pop generation, have experienced a lifetime of growth and the ability to choose. They will expect the same in their housing choice in later life.”

“When you think of today’s older people, like Patti Smith for instance, who is 73, we should ask, ‘Is there a place for them? Are we designing for someone like that?’ The answer is, ‘Probably not’.”

“Instead of offering a multi-purpose room for crafts and hobbies, as many retirement communities do, we might have to design in a recording studio, because you’re going to have people who would like to play the electric guitar and hit drums. They’ve grown up in the 60s and 70s, and still want to have a bit of that punk attitude. How do we accommodate people with a punk attitude?”

So, there needs to be diversity but what exactly does the future look like for later living housing?

Dominic sees completely age-designated communities as a limited concept. With the two loneliest generations being older people and people in their 20s and 30s, he adds that there must be a benefit to mixing both groups.

“We should not accept age as our defining characteristic. Ideally, housing would be age-blind. What we really want to see is good quality accessible, adaptable housing for everybody, irrespective of age. Until we re-examine how the planning system controls use and how investors see their investment path, we’re going to be stuck in silos. A rental silo, an affordable silo, an older people silo and so on.”

Making a housing decision comes with its difficulties but seeking a home to meet all your future needs can get complicated. Dominic explains how we can make good, informed choices when choosing to move or stay.

“One has to do that difficult thing and self-reflect. You try and think, what will the next 10 or 20 years hold? If you’re choosing to move or stay, you ask yourself: ‘How long do I want to be where I am or where I’m going?’, ‘For how much longer will my current home be suitable for my changing needs as I age?’.”

“Some people plan ahead, and others wait for a crisis. If you wait for a crisis, then at the point where you do decide to move into age-appropriate housing your choices are more limited. You’re potentially in a state of distress, of need, and you may not be in a frame of mind to think clearly at that moment. You can’t take the time because maybe you’re grieving for a lost loved one, or you’ve just been discharged from hospital having had a fall or a health scare. You don’t then have a year to think, ‘Well, what do I really want for my future?’.”

Bringing older people’s voices to light, ColladoCollins has published their book Just Living, which investigates the various journeys people might take when looking for a housing solution to suit their evolving needs in later life.

When working with clients designing housing for older people, Dominic found that too often the real estate opportunity was the main focus of the conversation.

“Where is the customer? Where is the person who is going to buy this? We are all sitting here talking about ‘them’, and they’re somewhere over there. They’re not present in the conversation. So, our starting point was to ask: ‘Who are ‘they’? What do older people themselves actually think about this?’.”

ColladoCollins set out to ask older people in person, over the phone, and via an online questionnaire, and talked to people involved in the sector from seasoned operators to new entrants. The resulting ‘target diagram’ was created as a way of understanding and analysing what a person has in their life, where it might go and what choices they may have. The tool is then used to match a person with the appropriate housing offer, to identify the gaps and the opportunities, and ultimately to enable the fullest possible life.

“Once you get older, you’ve done that bit of your life where you’ve worked hard, you’ve raised the kids, you’ve reached success in your career. Maybe you think you’ve made enough, or you’re old enough that you don’t have to work anymore. That should be a time when you say to yourself: ‘This is brilliant! I can cast off all the things that have been holding me back for the past 20-25 years and do something else’. Not just go on a cruise or travel the world, though that is great, but also use that time to think about your housing choice.”

“’Retirement’ is a terrible word. There is a great book by Sir Muir Gray called Sod 60. He says we shouldn’t call it ‘retirement’ – we should call it ‘renaissance’. I agree with that thinking – we should be embracing the ‘third age’ as a time of opportunity, not of decline.”

Nonetheless, the idea of ‘later life’ is still perceived by many as a contraction, not a time full of expanding new opportunities. Dominic gives his view on preventing these feelings as we age, and how to optimise later life.

“When you retire, you go through that period of adapting – and if you don’t find something new to dedicate yourself to, it can lead to a sense of loss, a lack of purpose.”

As people, we must have value, but society seems to forget this as we age.

Dominic adds, “We do not just retire and decline, and there must be a recognition of the value of experience. If that disappears, then it leaves a vacuum, a loss of self-worth. You have always got to keep learning and understanding.”

“In terms of preventing a contraction, you need to find a way to show people what’s missing and what is out there. Rather than feeling like later life is a scary thing, it needs to be expressed as an opportunity.”

We followed up by asking Dominic why he feels that people see ‘later life’ as a contraction?

“It’s not helped by the fact that we have these two lovely words, ‘care’ and ‘home’ – expressed individually those words invoke positive feelings, but don’t put them together!”

“The way we have dealt with ageing in this country for donkey’s years has been to bear with it for as long as possible and then stick ‘them’ in a home. And who wants that? Who is going to say, ‘I’ve got my house? It has got its faults, but I could be in a care home.’. Who is really going to make that choice and feel positive about it?” 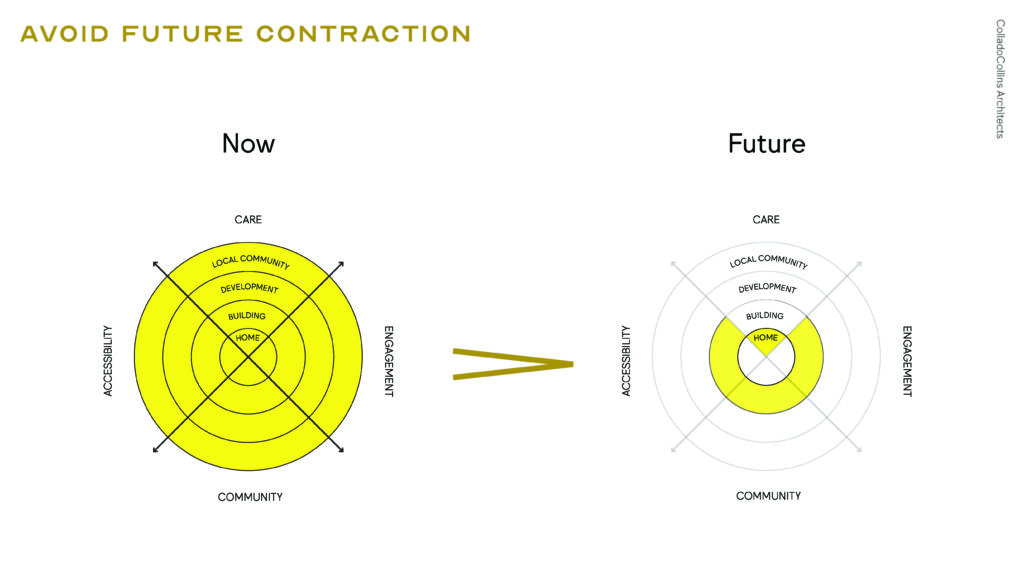 There are of course challenges faced when designing homes or communities for older people, Dominic explains further.

“You can’t offer all things to all people under one roof. There will be people who want a quiet life; those who want hustle and bustle and access to everything; those who want to be out in the countryside. Can one single place offer all of that? No. There needs to be a diversity of offers.”

“Are you prepared to live in a hospitality-style environment? For some people, that’s really appealing – because some of their sense of self comes from living a slightly public life. Getting dressed for dinner and being able to come down and feel like a million dollars.”

“I, personally, don’t want to live somewhere where I feel like I have to dress up to go down to dinner. If I want to wander around in tracksuit bottoms and a t-shirt with a rude slogan on it all day, then I am going to do that. I don’t want to live somewhere where doing that makes me feel out of place or uncomfortable. We need to offer places that work for all kinds of people.”

We end our conversation with what Dominic considers to be at the heart of the matter: what we will want in the future is what we want now – choice. Choice in how and where we live now and in the future. There is no doubt moving in later life can be a major event, nor that finding the right place can be difficult, but by providing a meaningful choice there is an opportunity to make that step a positive one. The value of delivering later living predicated on increasing longevity and quality of life, recognising the social value good housing for older people can deliver to the wider community, cannot be ignored. 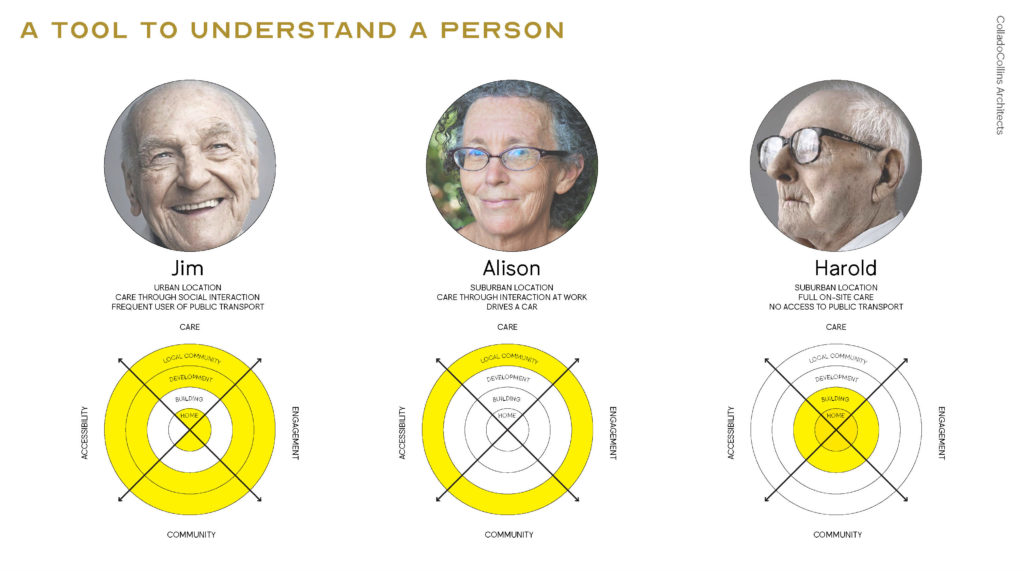 Dominic has worked in architectural practice since 2001. He has a track record in the design and delivery of residential projects, and the ability to create and maintain positive, productive relationships with stakeholders, clients, and the wider project team. His experience in the residential sector, both with private developers and registered social landlords, gives him a broad base of knowledge and expertise in both design and technical areas.

Dominic joined ColladoCollins in 2015, and now leads the teams responsible for later living and care projects. Following the publication of the Just Living book, co-written with research architect and specialist Carly Dickson, he has presented the research and findings at a number of sector-specific conferences and events, including convening one of the first full panels of older people to take the stage at conference in 2019.

Smalls things you can do to have a positive impact on your community.

6 reasons why gardening makes us happier. 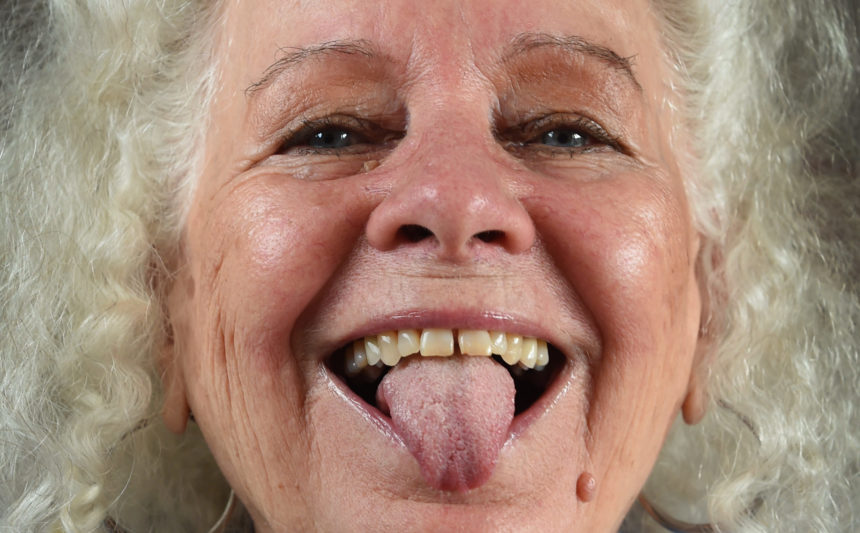 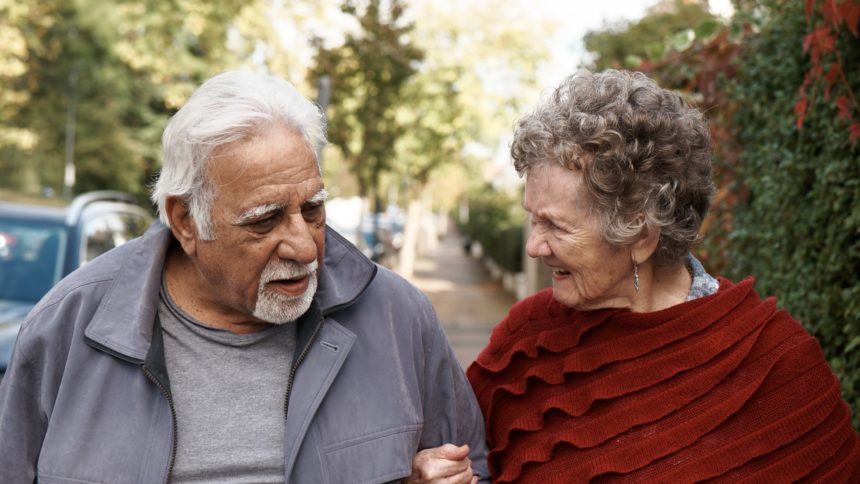